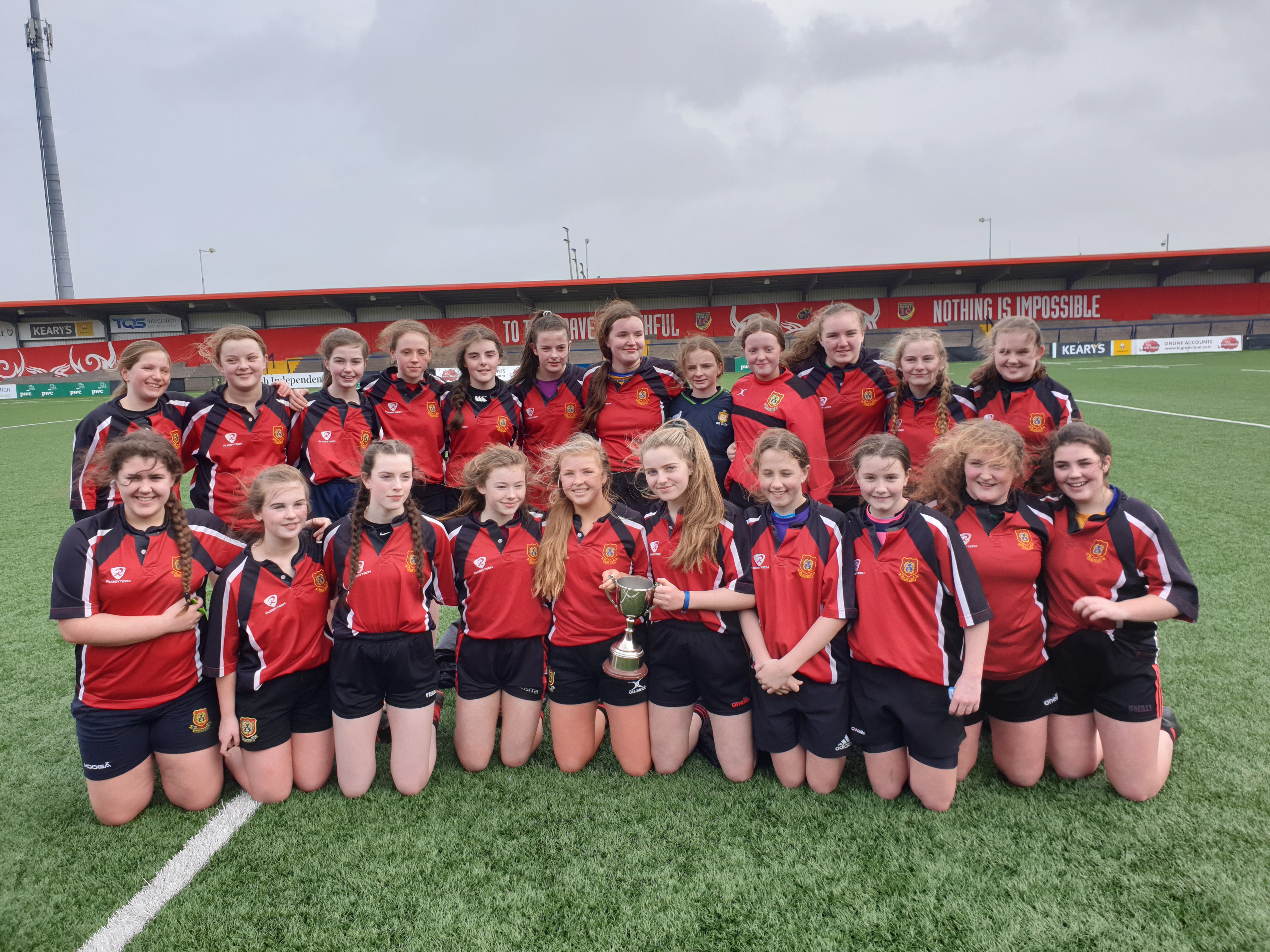 It was a red letter for Ennis Rugby Club on Sunday when the U14 Girls travelled to Irish Independent Park and secured the club’s first silverware of the season, winning the inaugural U14 Munster League final.

Ennis travelled to Cork as slight favourites having beaten Shannon earlier in the competition, but word had come through over recent weeks that the Shannon team had improved and had gained a few new players, so complacency was not going to be an issue.

From the kick off, Ennis started as the stronger team, despite Shannon having the larger pack. Relentless pressure from the Ennis forwards in the opposition 22 with strong running from the backline saw Ennis camped on the Shannon line. With the Limerick team defending the breakdown, Ennis put the ball wide and this resulted in a try for the outhalf Lyndsey Clark after 6 minutes.

The try went unconverted, but Ennis maintained pressure with great runs from the pack. Aine Longe, and Rhea Foudy in the 2nd row took the ball up the middle with great support at the breakdown from Kate O’Conner, Kiera O’Neill and Alana Foudy. The Ennis backrow of Blaithnaid Benson, Emily Kelly and Annie Lynch harried the Shannon runners all day and snuffed out any attempt from the Limerick side to counter attack.

Ennis maintained overbearing pressure for the opening quarter, and showing great vision and skill, Lyndsey Clarke put a beautiful kick through for Victoria Burns to race onto and score in the corner.

At 10-0 ahead, Ennis might have been forgiven for thinking they had the game in the bag but a team of Shannon’s calibre were never going to lie down and following a period of relentless pressure on the Ennis line, Shannon forwards scored a try to bring them back to 10-5 and within one score of Ennis.

Shannon kept the pressure on for the last 5 minutes of the half but ferocious tackling from Ennis on their goal line kept the score at 10-5 at the break.

The opening period of the 2nd half followed the same pattern as the last quarter of the 1st half, with Shannon camped on the Ennis line. But Ennis were in no mood to give way and after 10 minutes of solid defence followed by a turnover, they worked their way back up the field.

A huge feature of the Ennis game was the backline’s ability to close down any attack form Shannon’s strong running backs. Shannon weren’t able to get any change from the Ennis pack and tried to move the ball out the line, but the Ennis backline were up to the challenge and snuffed out their first up runners. The Ennis centre pairing of Mary McInerney and Sarah Scahill  gave no quarter, and when Shannon put the ball wide, the Ennis wings Eilis O’Flaherty and Victoria Burns shut down their opposite numbers with crunching tackles. When Shannon tried high balls, Eileen Keane at full back was up to the task and counter attacked with interest.

Both teams played the last quarter with ferocious intent. The two forward packs were relentless in carrying and at the breakdown. Both sides made changes and Sinead Walsh came on after the break to help relieve the tiring Ennis pack. With the game closing in, any mistake was going to have a huge impact and any score could prove fatal. Ennis managed to keep Shannon pinned in their own 22 for the last period and huge tackles  from Ennis ensured a historic victory for this young team.

With the last period of the game on a knife edge, the Ennis management declined to make any more changes, but this was a squad victory and Ciara Frawley, Aoibh Blake, Amy Butler, Kate Talty, Roisin Shannon and Eve O’Halloran campaign deserve great credit, having put in a huge contribution during the league campaign.

This site uses cookies: Find out more.
Scroll to top